Have you ever bought a pair of pants for your child or grandchild that were too big? It’s a common occurrence, and when it happens, you basically have two options: 1) you can throw the pants in the wash and try to shrink them, or 2) you can just sit back knowing that your child or grandchild will eventually grow into them. This same phenomenon applies when the price of stocks gets overinflated in relation to annual corporate profits. If you can learn to recognize when it’s happening, that knowledge can go a long way toward helping you make smart savings and investment decisions. 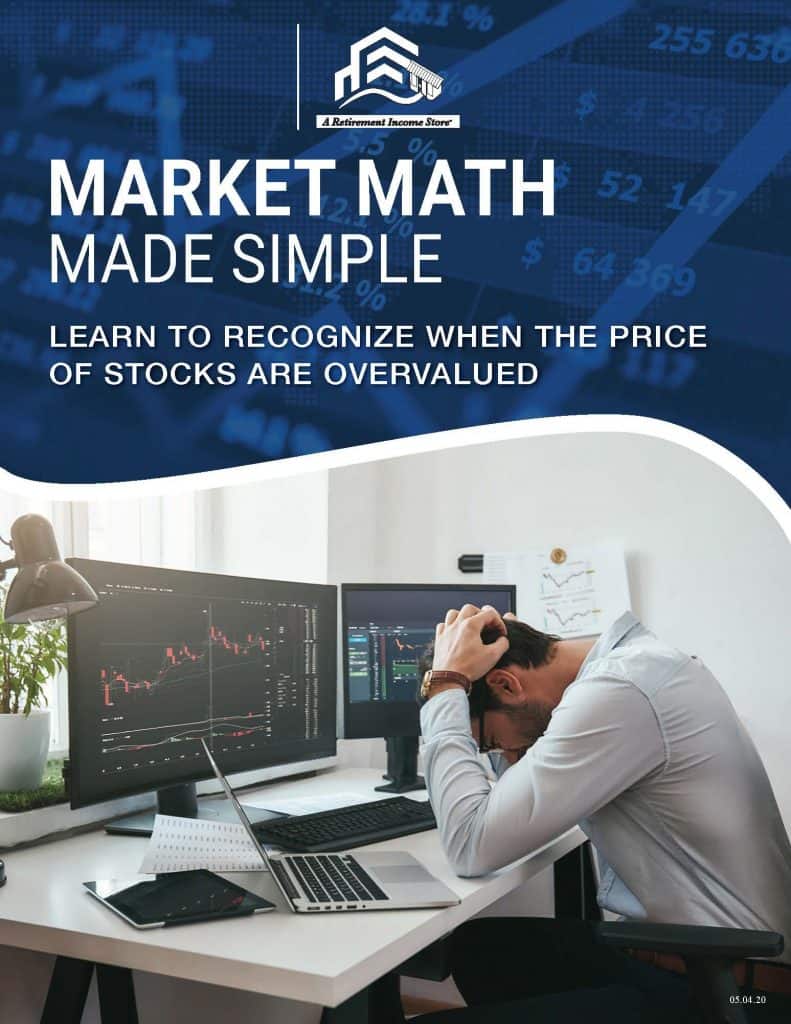 The odds for the drop scenario were slim because that didn’t happen very often. Essentially, in 1998, an investor could have realized that we were sitting on the cusp of a brand new 20-plus-year secular bear market. I wasn’t sure exactly when it would officially start, but I knew it would be soon. An investor could have surmised this based on an understanding of stock market biorhythms, past secular market cycles, and an understanding of a basic stock market formula: the price-to-earnings (P/E) ratio.

Every stock has a price-to-earnings ratio, and so does the entire stock market. The formula is simple: price per share divided by earnings per share. By comparing these two measurements in one stock and calculating the ratio alongside that of another stock, you can often get an idea of which stock is a better buy. As a very general rule of thumb, the stock with the lower price-to-earnings ratio is the more attractive stock because it is considered undervalued, and remember, the goal is always to “buy low.”

Again, both individual stocks, and the market overall, have a P/E ratio, and if you keep track of the overall ratio, it can give you a good indication of when stock market levels are generally too high and ready for a drop. This is exactly what I observed in the late ‘90s when I recognized that what I believe to be our current secular bear market was about to begin. At that time, the average P/E ratios had exceeded 30, which meant that each dollar invested was buying just three cents of earnings or 3

annual profits. To put that into perspective, you would have been earning about 3 percent on your investments when, during that same period, you could have taken some of that same money and bought an FDIC-insured CD and earned 5 percent.

Now, what does history tell us about P/E ratios when we look at long-term secular market cycles of the past? As a matter of fact, whenever we’ve come to the end of a secular bull market cycle – be it in the late ‘20s, the mid ‘60s, or the late ‘90s – P/E ratios have typically been near or above 30. So, history tells us that 30 is the warning sign. It’s just like if you have a swimming pool; you know there’s a certain number on your pool filter that tells you when it’s time to backwash. Ignore that number and the pressure will keep building, and eventually, your filter may conk out.

Why 30? Because at that point, the imbalance in the price-to-earnings formula is bordering on ridiculous. That’s exactly how things looked in the late ‘90s when so many people were still buy-and-hold happy despite this crazy imbalance. Here’s an analogy: suppose you decided to buy an ice cream parlor and the owner wanted a cool $3 million for it, and you knew the business consistently earned $100,000 annually. That’s a P/E ratio of 30, and it means it would take you 30 years to recoup your investment and hopefully start turning a profit. Now, suppose I remind you again about that FDIC-insured CD you might have invested in instead or told you that you could have bought government bonds and earned more in less time without having to dig into a single carton of Rocky Road? Then which option sounds more appealing to you?

Now, to look at the opposite end of the P/E spectrum, typically, toward the end of a secular bear market, price-to-earnings ratios slip below 10, very often into the 6 to 8 range. Historically, that’s been a key signal that the next secular bull market cycle of steady growth is about to begin. So, why do secular bear markets like the one I believe we’re in right now typically last 20 years or more? It’s because that’s how long it takes for P/E ratios to make that drop from 30 to the 6 to 8 range, which, again, generally happens in one of two ways: either stock market levels suddenly drop by 75 percent (which hardly ever happens) or corporate earnings slowly quadruple and grow into the inflated stock prices, just like a child might grow into an oversized pair of pants. You might be wondering what “slowly quadruple” means. How long does that take? Well, usually 20 years or more, with the market fluctuating wildly the whole time.

So, clearly P/E ratios can serve as a good indicator of where we stand in a secular market cycle, but are there other indicators? Indeed, there are. One of these indicators is based on the fact that most people don’t get serious about saving and investing for retirement until their late 40s or early 50s. With average life expectancies in the early 80s, that means, as a rule, most people are serious about their retirement investments for about the last 35 years of life – the same length of time it takes a combined secular bull-bear market cycle, or one market biorhythm, to run its course. Coincidence? I don’t believe so.4

Do you remember your parents giving you advice based on bad decisions or mistakes that they had made? Of course you do. Did you ever take their advice? Of course you didn’t. Unfortunately, human nature dictates, to a large extent, that we learn through our own mistakes. This applies to investing mistakes as well. The common mistake each generation repeats is letting greed take over during good times and creating speculative asset bubbles by driving stock prices to highs that are not supported by economic fundamentals. Every generation has to have, it seems, this period of greed where asset prices get overblown until everything comes crashing down.

So, practically speaking, what are your options as we continue to wait for corporate earnings to grow into overinflated stock prices, and what are you to do when this generation’s speculative asset bubble bursts – which I believe history tells us could take up to another 7 years? Well, for starters, it’s essential to recognize that “buy and hold” doesn’t work in a secular bear market. It works great in a secular bull market, but in a secular bear market, it just puts you on a long rollercoaster ride that ends in zero net portfolio growth. Beyond that, you can take one of two roads:

Getting started is as easy as contacting a qualified financial advisor who specializes in the universe of non-stock market income-generating investments. This is income you can spend if you’re retired or that you can reinvest in order to grow your portfolio organically, or “the old-fashioned way,” with far less worry over damaging losses that could impact your life and sideline your retirement plans.