If you’re like most people, you believe there’s a great deal of truth in the old adage that history tends to repeat itself more often than not. That’s an important adage to keep in mind when it comes to saving and investing for retirement because it allows you to get a glimpse into the future by knowing something about the past. The fact is, the stock market has been repeating itself consistently enough throughout history to allow us to see some repeatable long-term patterns, or market “biorhythms,” which are important to recognize and understand when it comes to building a smart, defensive investment strategy. 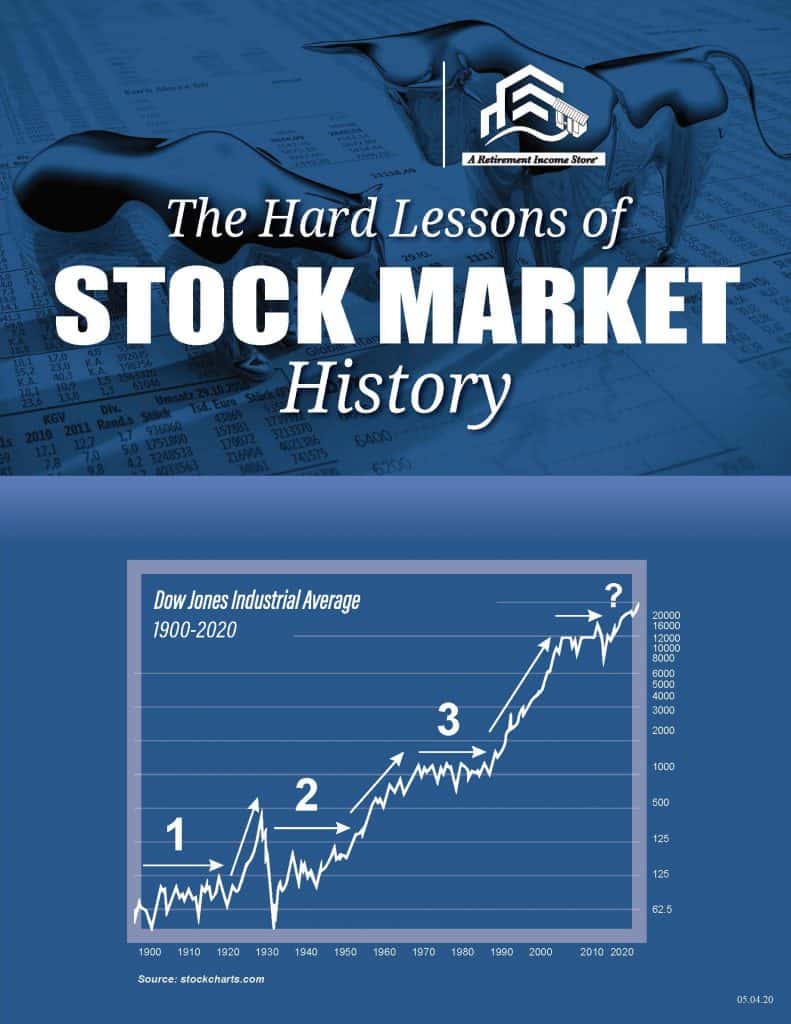 First, you need to understand something about what particular “version of the truth” Wall Street and most brokers like to tell when talking about the stock market. Most people have probably been told that the market averages about a 9 percent return over the very long run. The way that actually breaks down is that 2 to 3 percent of this return comes from stock dividends, and 6 to 7 percent comes from capital appreciation — in other words, a 6 to 7 percent average growth rate over the very long run.

That may sound pretty good, but you have to bear in mind something about how “averages” can be determined and why they can be misleading. If a friend told you that he jogged “an average” of 10 miles per week with his business partner, you might be impressed until he explained that his partner actually jogged 20 and he didn’t jog at all. Together, they do still “average” that 10 miles, so he did tell the truth, but it was a misleading “version of the truth.”

So, what exactly are these huge periods of time that alternate between growth and stagnation?

From 1899 to about 1921 — based on the most commonly available stock market indicators from that time — the market experienced tons of volatility. There were big gains and huge drops, but in the end, all the good and bad years over that long stretch of time washed each other out, resulting in a period of zero growth over 22 years. Right after that came an eight-year stretch (1921–1929) that represented, at that time, the best decade we had ever seen for the stock market. These “Roaring 3

‘20s,” as they were known, came to an abrupt halt with the stock market crash of 1929 and the start of the Great Depression.

But, an interesting note ignored by most history books is that “The Crash” actually signaled the start of something very much like that 1899 to 1921 period of zero growth. From 1929 to 1954, the market again experienced tons of volatility; big gains and huge drops that ultimately washed each other out, resulting in a 25-year stretch of zero growth. Then came another long stretch where the market did incredibly well: 1954 to 1966 was the Eisenhower era, when America was totally on top of its game. Unemployment was very low, and people were making good incomes and living well.

But in 1966, things started to turn again. Once more, we entered a long period, this time almost 17 years, from 1966 to 1982, where the market had major ups and downs that ultimately canceled each other out and resulted in zero growth over all that time. The Dow Jones Industrial Average hit 1,000 in 1966, and in 1982, it was still at 1,000. Then — right on schedule you might say — the market took off and we enjoyed the best bull market we’ve ever seen in US history for 18 years. In that time, the Dow went from 1,000 to almost 12,000, a 12-fold increase that culminated with the high-flying 90s.

Where Are We Now?

So, getting back to the historical progression of these biorhythms after 1899, where do we stand right now? Well, of course, after enjoying the best bull market in our country’s history for 18 years, everything turned again — right on schedule, pretty much — in 2000. The century started with another major market drop, and in the last 20 years, we’ve experienced tons of volatility and altogether two major drops that have wiped out previous gains and subsequently moved on to all time highs.

Let’s look closer at these alternating historical cycles and ask ourselves: how long is the average secular bear market, historically speaking, and how long is the average secular bull market? On average, these long bear market cycles have lasted about 20 years or more, while the bull market periods have averaged 10 to 15 years. With that in mind, how long does it take for the market to go through one full cycle or one full biorhythm? The answer is about 35 years.

In other words, statistically speaking, if you have money that you know for sure you’re not going to need or want to spend for 35 years, you should, in theory, be able to put it in the stock market and have it outperform most other investments. That’s because, as we’ve said, over the very long run, the market averages a 9 to 10 percent return. But, now you know just what that term “long run” really means, and unfortunately, there aren’t too many people in a position to just sit on their nest egg, or even part of it, for three and a half decades.4

At this point, you may be wondering why, when you hear a financial analyst on television talking about a “bear market,” they never say anything about it lasting 20 years or more. To most analysts, a “bear market” lasts two or three years at most. Here, again, they’re telling you an alternate “version of the truth” based on the textbook definition of a “cyclical” bear market cycle. Remember, one of the key characteristics of a long- term secular bear market is volatility. There are a lot of ups and downs, often lasting several years at a time. These ups and downs are the “cyclical” bear and bull markets that occur within the longer-term secular cycle, and they are what TV analysts prefer to focus on when they talk about market conditions.

Why? Well, it’s all tied to what Wall Street does and doesn’t want the average investor to know and its need to speak optimistically as often as possible. It’s important to understand that Wall Street knows it can make more money and get more people to invest in their products if people are optimistic and think the markets are going to do well. The reality is that if they talk about short-term cyclical cycles, they can speak optimistically about the markets more often.

It’s not hard to understand why Wall Street itself would prefer to talk about short-term cyclical cycles and ignore the very existence of long-term secular cycles. What do you think might have happened to a Wall Street CEO if, in 2000, he had publicly forecasted that a 20-plus-year secular bear market was just starting and advised his sales force against selling any more stocks or mutual funds? He probably would have been out of a job.

So, the question now is this: Is it possible that this will be the first time in nearly 200 years of history that the stock market will recover after 20 years of a secular bear market cycle without a third major drop? Anything is possible, of course, but the lessons of stock market history clearly tell us that it’s far from probable.

Now, how can you start putting the lessons of stock market history to good use today? Simple: by contacting a qualified financial advisor who specializes in the universe of non-stock market investments designed to generate income through interest and dividends. This is income you can spend if you’re retired or that you can reinvest in order to grow your portfolio organically, or “the old-fashioned way,” with far less worry over damaging losses that could impact your life and sideline your retirement plans.